Best Screen Recorder for Windows 10 - Worth Trying in 2022

Rashmi
Editor
posted on 8 months ago
690
views
Nowadays, where most of the persons are using Windows 10, Windows latest OS version on their system for studies, business meetings, sharing video documents, etc they may also require the Best Screen Recorder for Windows 10 to record their screen.

They may also need to know what is the best free Screen Recorder for Windows 10, whenever they watch live streaming videos or perform tasks like attending a video conference meeting.

The “rolling updates to the operating system” meant to improve the system continuously with smaller updates rather than making larger updates through new OS versions.

Windows 10 also has supports for the "Universal apps" which are designed to work on video game consoles, HoloLens, smartphones, along personal computers. The credit for the universality of this app goes to the API, introduced by Microsoft in its previous Windows version 8.1.

Microsoft Edge -  is a new web browser that was introduced as one of the biggest updates made in Windows 10, which is completely different from Internet Explorer. 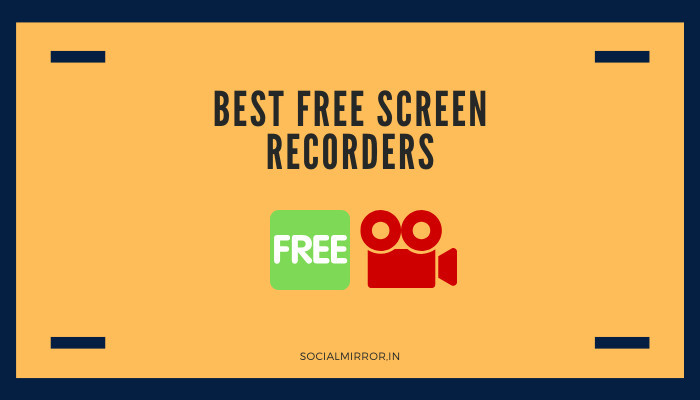 Game Bar works well with the games downloaded from the Windows 10 Microsoft store as it is enabled by default in these games. It is not only used for games but can also be used for any Universal Windows Platform (UWP) app.

Game Bar can be launched by pressing the WIN+G key together and to start the recording of the screen you just need to press WIN+ALT+R keys together. And if you are using the Xbox controller then it can be launched simply by clicking the Xbox button.

Game Bar should have to be enabled by default but if it is not so, you need to enable it before launching it for use. The steps to enable the Game Bar is given below:

So, before moving towards the list of the best Screen Recorder for Windows 10, let’s see the importance of screen recording.

As we have discussed above, nowadays most of the business activities, educational activities, etc are going online, where presenters also need to interact with their audience online.

To cope up with such circumstances a tool called Screen Recorders plays a vital role in running the organization smoothly without coming in direct contact with each other.

Basically, Screen Recorder is an underestimated software that is used to capture digital recording of whatever you do on your devices. We will see some of the best Screen Recorder for Windows 10 later in this article.

First, let's see some of the benefits of using them:

Effective Communication with Prospects and Clients

When you are unable to meet your clients face-to-face, then the only option to interact with them efficiently is video conferencing and for a live demonstration of your work, you can share screen recorded clips. These clips may help them to discuss with their team and to make fair decisions.

Since all video streaming platforms don’t provide the option for saving or downloading videos for future use or may demand some money for downloading them, in such scenarios, you can make your own copy of those videos with the help of a screen recorder.

You can also make a copy of the video conference meetings for future reference, as no one is that much capable to remember each and every point discussed during the meeting.

Get Appropriate Technical Assistance by Recording System Bugs and Errors

System errors or bugs are the things that can bring your online business to a halt, due to which you may have to face bankruptcy in your business.

So to resolve these system bugs and issues as soon as possible, you can create a recording of those bugs, which can help technicians in understanding and resolving them quickly.

As video tutorials are more effective to learn, they may help you to understand step by step process to do something on your system. Instructors use video tutorials to make the class interactive and engaging.

And the recorded screen videos also allow students or learners to stop them, whenever they need to do so while learning.

Screen Recorders allow employers to track the online activities of their employees while they are in the office and also helps in getting better insights into the work in progress.

This may help employers to get insights on the productivity of their employees, how they interact with the clients, which applications they used the most, and if they are really getting benefitted from the tools or features that have been recently enabled in their systems.

For recording the screen, we need some screen recorder tools or screen recording software. Some of the Best Screen Recorder for Windows 10 are discussed below:

According to me, the best-paid Screen Recorder is the one that also provides a professional look to your videos along with providing all the features of recording and editing them, and that one software is Camtasia.

The free, as well as the best Screen Recorder for Windows 10, is the one that allows you to make videos without any time limit and watermarks, along with all the features required to record, edit, share the videos.

The name of that free software is Open Broadcaster Software. It also helps in creating live streaming videos.

Windows 10 has an in-built Screen Recorder software called Game Bar, which can be used for recording screens while playing games. It is specially developed for gamers, as a part of the Game DVR feature of Windows 10.

There are many screen recording software available in the market, some of the best free, as well as paid Screen Recorders, are mentioned below:

According to me, Camtasia is the best screen recorder for Windows 10 in the paid category as it provides polished and professional-looking videos which can be used for business purpose.

Whereas Open Broadcaster Software is the best screen recorder for Windows 10 in the free category as it allows you to produce live streaming videos along with screen capturing ability.

If you are interested in reading about ongoing or upcoming changes in the field of technologies through such interesting articles, get them here at SocialMirror.

If you have any queries related to the article, you guys can ask me in the comment section below.